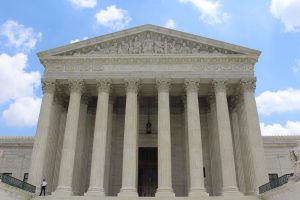 In the case, the U.S. Army Corps of Engineers versus Hawkes Co., Inc., the eight justices unanimously decided that the determinations should be open to court review, but four offered concurring opinions outlining separate lines of reasoning for reaching that conclusion. This indicates that the WOTUS rule could be heavily scrutinized if any of the current lawsuits reach the Supreme Court.

Conservatives Win in the Hawkes Decision

With the recent ruling, conservatives have enjoyed a strong win for property rights. At the same time, environmentalists are arguing that the Hawkes ruling only shows how important WOTUS will be. According to environmental activists, this ruling will only make it more difficult to handle wetlands and streams. Instead of a blanket ruling, violations would be handled on a case-by-case basis. Originally, the new water rule was expected to put more wetlands and streams under federal protection.

The Hawkes case started because the peat-mining Hawkes company wanted to mine land in Minnesota. Hawkes brought the case to the courts because the Army Corps of Engineers decided that permits would be needed because of the wetlands present and the Red River of the North that was 120 miles away. In response, the Hawkes company argued that that it would be prohibitively expensive to get a mining permit, and the company did not think that the wetlands were under federal protection.Meanwhile, the Justice Department’s case centered around the fact that determinations are not binding. Instead, applicants can challenge the agency in court, apply for a permit or ask for a judicial review. In response, Chief Justice John Roberts said that neither view was adequate. Justice Ruth Bader Ginsburg argued that a memorandum between the EPA and the Army Corps of Engineers was not enough to base an opinion on. While Roberts’ opinion focused entirely on a memorandum between the two organizations, Ginsburg concluded that jurisdictional determinations amount to the government’s final decision. As such, she believed that they ought to be reviewable according to the Administrative Procedures Act.